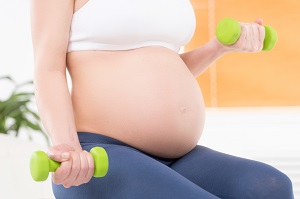 A new study confirms that exercising during pregnancy reduces the risk of obesity in children. Children exposed to prenatal sport gain less weight on average, even when they eat high-fat foods. This benefit is also valid for mothers with obesity problems, a delicate situation even for the child. This means that some sports during pregnancy are always beneficial, unless otherwise indicated by the doctor.

Researchers have studied the effects of exercise on metabolism. To this end, they analyzed a group of obese and non-obese pregnant guinea pigs. Some of these did 60 minutes of moderate exercise every morning during pregnancy. Others have led a sedentary lifestyle, acting as a control group. After giving birth, the researchers compared the two groups of puppies.

The young whose mothers had been exercising had high levels of proteins associated with brown adipose tissue. Unlike traditional adipose tissue, brown tissue converts fat and sugar into heat. The children in question had in fact a higher average body temperature, with positive effects on the metabolism. Later, the two groups followed a high-fat diet for eight weeks. Sports group mice gained less weight, with even less negative health consequences.