Why perform the AURORA test? 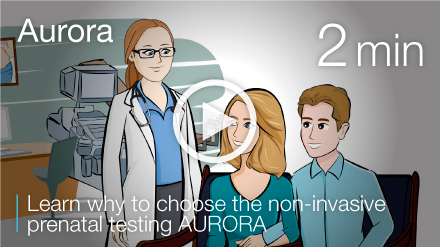 AURORA is a non-invasive  prenatal test that is performed mainly  for two reasons:

Why choose the AURORA test rather than other fetal DNA testing on maternal blood?

AURORA is the test that offers the better technology  and an excellent service.
thanks to the partnership between Sorgente Genetica and Illumina Inc., the AURORA test can rely on the best technology available today. The tests are performed in California, USA, at the labs of Illumina Inc., a company listed on the New York Stock Exchange, world leader in the production of DNA sequencing machinery.  The AURORA test uses the cutting edge technology of massive parallel sequencing (MPS) of the entire human genome, unlike other tests available that use instead a targeted investigation strategy. This produces the following advantages:

Sorgente Genetica relies on procedures that make the execution of the test simple and safe:


When to perform the AURORA prenatal test?

The AURORA test can be performed starting from the 10th week of pregnancy.

Who can undergo the AURORA test?

The test can be performed by all couples who wish to get more information on their  fetus’s health. There are specific cases in which the test is particularly recommended:

The AURORA test is available for singleton or twin pregnancies resulting from natural conception or with techniques of medically-assisted fertilization (ART).

How to order the AURORA test kit?

To order the AURORA test kit you just need to call us at 0236705871. Our experienced biotechnologists are at your disposal to give you all the necessary support.

How is the AURORA test performed?

To perform the AURORA test you need to contact Sorgente Genetica by calling 02 36705871 and schedule a date for the blood sampling. Once the payment for the test has been made, Sorgente Genetica confirm the booking of the blood sampling and manage the shipment of the blood collected to the lab. The blood draw can be performed either at the surgery of the patient’s gynaecologist -  assisted by an Operator of Sorgente Genetica -, at an associated collection point, or at the patient’s domicile (sampling at a non-associated lab is not included in the service). Finally, read and interpret the results with your gynaecologist (doctor/specialist).

How accurate is the test?

The reliability of the AURORA test is higher than 99.9% (in relation to the most frequent trisomies, Down Syndrome and Edwards Syndrome).

Is the AURORA test  similar to first and second quarter screening tests?

No, the Aurora test is not similar to first and second quarter screening tests. The Aurora tests detects and measures in maternal blood the amount of free circulating fetal DNA of chromosomes 13, 18, 21, X and Y. By means of this measurement, the Aurora test is able to determine with great accuracy the presence in the fetus of any trisomies or aneuploidies. On the contrary, first and second quarter screening tests measure the amount of certain substances in maternal blood associated with certain chromosomal disorders.

Our specialists are at your disposal